Dual Neutrik XLR/TRS combo jacks support both mic-level and +4dBu line-level. These inputs can accept balanced microphone or line level from Mixers or the FOH console. The microphone preamp includes +48V phantom power and plenty of gain for detailed recordings with condenser microphones, as well as electret type microphones. Using the stereo built-in microphones, you can capture ambient sound of the audience while recording direct from an external console, which is ideal for capturing live performances.

DR-40X allows high-quality recording with its stereo built-in condenser microphones. Every detail is captured from small whispers to loud sounds up to 125dB SPL. These built-in microphones are adjustable unidirectional microphones for recording in an X-Y pattern for tight stereo imaging, or in an A-B pattern for a more ambient recording.

The layout of the DR-40X has been revamped to be quick and easy to work with one thumb. Operations like recording, adjusting levels, deleting bad takes and adding markers are just a button press away.

Writing down what you hear – Easier said than done, but it is actually easy with DR-40X. In addition to its capability to capture crisp voice recording, DR-40X can help you with its Jump back function, variable Speed function and equalizer preset for human voice.

Film-makers and videographers often experience sudden audio volume spikes during filming. An actor could suddenly scream, or a documentary subject could do almost anything.
DR-40X has a Dual Recording mode that captures a copy of your take but at a lower level, as a safety track in case of sudden distortion. Also, Auto recording function can detect the sound input signal level and automatically start recording. The Pre-recording function with up to 2 seconds pre-record provides fail-safe protection.

Peak Reduction works in rehearsal mode or in record. Even if the sound or performance is louder than the sound check you’re safe. Combined with Auto level and Limiter for preventing distortion, you never have to worry.

If you don’t like the last part of a phrase you just recorded with your guitar, or if you change your mind and want to rephrase narration, the “Overwrite mode” is exactly what you need. Overwrite mode allows punch-in recording from a desired point. It is destructive editing with one level of undo.

The overdubbing function allows for Overdub Recording while playing a previously recorded file. This allows you to record other parts such as a guitar solo over a recording previously made such as at a rehearsal studio. Overdubbing creates a new file, leaving the original file unaffected, making it easy to re-record.

Features
High-quality unidirectional stereo condenser microphones that can record in A-B and X-Y positions
XLR/TRS inputs compatible with +4dBu line level / +48V
4-channel mode that can be used for dual recording and nondestructive overdub recording, etc.
Support multiple languages for menu (ENG/FRA/DEU/ITA/ESP/RUS/PRT/JPN/CHI/KOR)
Overwrite function for Punch-In recording with one level of Undo
Functions as a 2in/ 2out USB Audio Interface for Mac, PC or iOS recording
Dictation mode designed for human voice recording and transcription
MS decoding function making it possible to use M-S microphones
Optional RC-3F foot switch and RC-10 wired remote control can be connected
Long-time operation of maximum 18 hours is possible using just the internal batteries
Reverb effect
Auto recording function
Proven high sound pressure design for capturing loud sounds of up to 125dB SPL
Peak reduction function that detects peaks and automatically sets the optimal level
Self timer recording function
Seamless gain control
Low-cut filter with three levels (40/80/120Hz)
Speed change (VSA) function for adjusting the speed from 0.5 to 2.0 times (in 0.1 increments)
Level align feature that prevents uneven volume levels
Equalizer setting for adjusting playback sound quality
Divide/delete functions
Loop/repeat playback function that is convention for practicing music and studying languages
Resume function that retains the last stop position and starts playback from that position when power is turned back ON
Jump-back playback function that skips back a preset number of seconds during playback
QUICK menu button for easy access to various functions
High-quality 24-bit/96kHz WAV/BWF linear PCM and MP3
SD/ SDHC/ SDXC (up to 128GB) can be used for recording media
Mark function that can set up to 99 points for a single track
Audio files created on computers can be played (Only in formats compatible with this product)
Built-in monaural speaker with an output of 0.3W
Pre-recording buffer that can record up to 2 seconds prior to starting recording
When a predetermined maximum file size is reached, a new file is created to continue recording
Track increment creates new files at arbitrary locations during recording
File name format can be set to use a user-defined word or the date
The first six characters of the file name for recording can be set freely
Playlist function
A chromatic tuner is equipped which is helpful for practicing musical instruments
Stereo mini line output / Headphone output connector
128×64 pixel graphic LCD with backlight
High-speed file transfer to a computer using USB 2.0
Powered by 3 AA batteries, USB bus power, or optional AC adapter (PS-P520E)
Rubber feet for improving acoustic properties during desktop recordings are included
Tripod attachment screw-hole built in to the unit 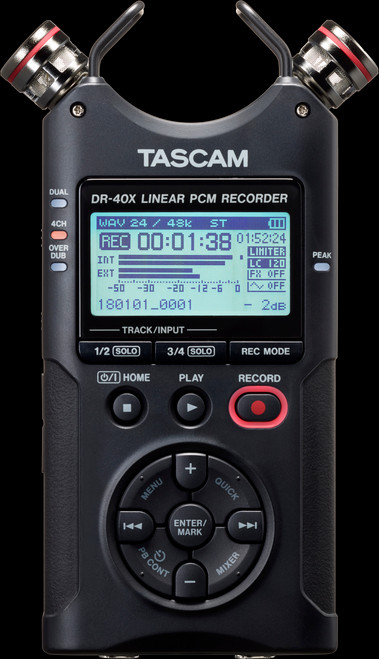