The new Pocket Pro utilizes a bright white 25-Watt LED light-source, which offers twice the power of the original Inno Pocket Spot (which had a 12-Watt LED). The light from this potent LED is then focused through an advanced optical system to create vivid surface projections and impactful beams of light that belie the unit’s compact form.

Not only does this new and improved fixture provide incredible output, it also offers replaceable GOBOs. This is an advanced feature that is unprecedented on a moving head of this size and at such a low price-point. The Pocket Pro is fitted with a 7 position (+ open) GOBO wheel pre-loaded with a collection of detailed patterns some of which are particularly suited to surface projection while others are ideal for creating mid-air effects.

However every one of these GOBOs can easily be replaced thanks to the unit’s easy-access hinged-case design. Once the Pocket Pro has been opened up, the pre-installed GOBOs can easily be slid out and replaced with alternative patterns. Four useful additional GOBOs – including one depicting a pair of rings surrounded by a heart that is perfect for wedding celebrations – are supplied with the unit, while custom patterns can also be used. The fixture is compatible with any metal GOBO with an outer size of 18.4mm and a visible area of 13mm. 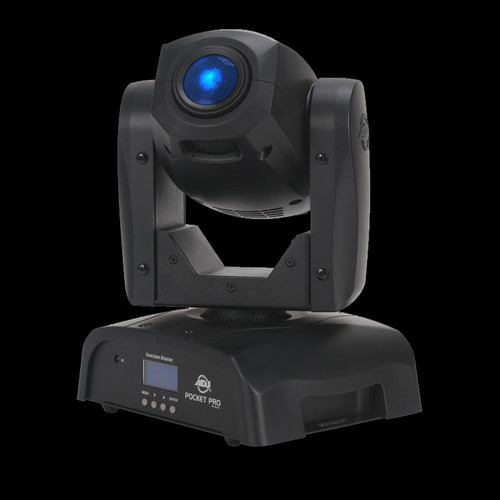